Former Credit Suisse chair António Horta-Osório will join Mediobanca as a senior adviser next month as part of the Italian investment bank’s drive to boost its international influence, according to people with knowledge of the appointment.

The Portuguese financier, who was forced out of the Swiss lender earlier this year, will work alongside Giuseppe Baldelli and Francisco Bachiller, the co-heads of the corporate and investment banking unit, with a remit to expand its European business, the people said. Baldelli, Deutsche Bank’s former Italy chief, was recruited in May.

Horta-Osório and Mediobanca chief executive Alberto Nagel have been friends for about three decades. Nagel and the Milanese bank’s leadership hope that the veteran executive will be able to help them win more deals and seek out potential acquisitions in the region.

“Horta-Osório’s vision and network will help expand Mediobanca’s business,” said one of the people. “And it will be important to have someone like him on board in the context of the European banking sector’s consolidation.”

The role is one of several positions at different companies Horta-Osório has negotiated for himself over the past six months, with others to be announced, according to people with knowledge of his plans.

This week he resigned from the board of PartnerRe after the Bermuda-based reinsurer was bought by French mutual Covéa. He had been appointed to the board by previous owner Exor.

Nagel told the Financial Times: “I have known Antonio for many years and I’ve always been impressed by his experience, track record and ability to lead companies through strategy rethinks.” A spokesman for Horta-Osório declined to comment.

Horta-Osório lasted less than a year as chair of Credit Suisse, quitting in January after losing the confidence of his board when it emerged he had breached Covid-19 quarantine rules to attend sports events with his family.

Last July, he flew to London to attend the Wimbledon tennis finals and the final of football’s European Championships on the same day, without adhering to UK quarantine rules. He later breached Swiss restrictions on a separate trip.

His use of company-funded private jets for personal trips also antagonized his fellow board members.

Horta-Osório was drafted in to Credit Suisse to lead a cultural overhaul in the immediate aftermath of twin scandals that seriously damaged the reputation of the 166-year-old lender: the collapses of Greensill Capital and Archegos, the family office run by former hedge fund manager Bill Hwang.

Horta-Osório set about improving risk management within Credit Suisse and oversaw a near complete replacement of its executive team, along with chief executive Thomas Gottstein.

He was paid SFr3.8m ($4.1mn) for his nine months at Credit Suisse — three-quarters of what he would have been entitled to annually — including SFr1.1m paid in cash rather than stock.

Video: Credit Suisse: what next for the crisis-hit bank? | FT Film

Horta-Osório was knighted by the UK last year for his services to financial services, mental healthcare and culture. He successfully turned around Lloyds Banking Group during his decade in charge, and British taxpayers were fully repaid after a crisis-era government bailout.

He joins a bank looking to re-establish its influence and identity. Along with many financial stocks, Mediobanca’s valuation has dropped 21 per cent this year as fears of a recession and a stark decline in deal volumes have soured sentiment.

Traditionally a powerbroker for Italy’s financial and business elites, the Milanese bank has modernized over the past 10 years, reducing its cross-shareholdings in local family-owned companies.

After being locked in a six-month power struggle over the future of Generali, Italy’s largest insurer, with two billionaire shareholders who were agitating for a management shake-up, Mediobanca’s chief is now focusing on the implementation of its three-year business plan. 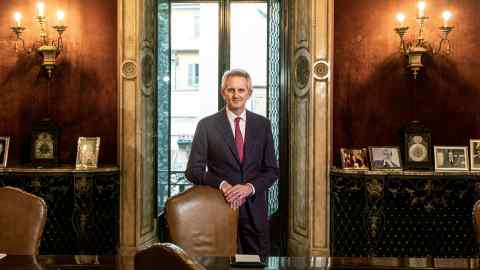 Nagel has sought to diversify the bank’s business by developing a wealth management division based on more regular fee-based income. It played an important role in driving revenues to a record high of €2.6bn last year.

Meanwhile, the investment banking unit has struggled to compete with larger institutions internationally. Horta-Osório and the other appointments are aimed at strengthening its European presence in both investment banking and wealth management, with an eye on deals that can be reached to boost its presence and capabilities.

According to senior executives at Mediobanca, other deals like the 2019 acquisition of French mergers and acquisitions boutique Messier & Associés are likely to follow over the next couple of years.