It’s information overload everywhere, and there’s not enough time to sleep and eat and stay fully apprised of what’s happening on this crazy blue dot of ours (two out of three ain’t bad). Here’s the weekend Sports Handle item “Get a Grip,” recapping the week’s top US sports betting stories, highlighting some fresh news, and rounding up key happenings.

Top stories around our network this week

This week, much of our staff was at the SBC North America Summit in New York and New Jersey, getting intel and insight on the sports betting world.

Among topics, there was a panel that discussed the potential hazards of legal sports betting involving NCAA athletes, an in-depth talk with everyone’s favorite sports bettor (OK, not really) Mattress Mack, a presentation on entry into the online casino space, and another insightful discussion with FanDuel CEO Amy Howe.

But that won’t be all. Expect more to read in coming weeks from the SBC gathering.

…or not so much

The 60-year-old Wire Act still has teeth, but ambiguity is a challenge

Some movement in Ohio

FanDuel rides parlay wagering to another huge month in Illinois

Maryland sports wagering handle tails off to $19.1 million for June

Caesars Sportsbook this week released renderings of its planned state-of-the-art sportsbook and poker room at the Harrah’s New Orleans — which will be rebranded as a Caesars property — and announced plans for a new Guy Fieri restaurant at its Capital One Arena location in Washington, D.C.

In New Orleans, the 5,700-square-foot sportsbook will have a “spectacular” video and audio system, including a 147-foot-tall video wall, according to a company press release, as well as 12 kiosks and four teller windows. The 5,000-square-foot poker room will be the largest in Louisiana and will have 20 tables, as well as tableside beverage service.

The sportsbook will be able to seat 140 customers and a private “Fan Cave” will also be available. Caesars will hold weekly tournaments on Sundays, Mondays, and Wednesdays, and will open at 10 am daily.

In Washington, Caesars is adding 700 square feet to its 18,000-square-foot facility, in addition to creating access to the book directly from the concourse. Patrons will be able to enter when inside the facility, as well as from the street. There will also be a new Kitchen + Barn by Fieri, the second in a Caesars sportsbook following the opening of the Phoenix location at Chase Field earlier this month.

“We’re incredibly proud of the growth and innovation that have transformed our industries since launching our partnership four years ago, and we’re eager to continue breaking new ground and delivering world-class sports and entertainment experiences for baseball fans worldwide,” said Lance Evans, MGM Resorts’ senior vice president of sports and partnerships.

Square in the Air and CTP on Tuesday announced they have joined forces in the US to create Chalk + Dog, a new sports betting-focused advertising and marketing firm that will offer public relations services, sponsorship activation, social media, paid media, brand strategy , creative production, design, digital marketing, branding and analytics, to B2B and B2C companies. Tally Technology and Huddle Tech have already signed on to work with the new agency. Square in the Air Director Ben Cleminson and CTP SVP Public Relations Todd Graff will take the lead on the new project.

Another European-based company in the wagering space announced it is increasing its US footprint this week, as exchange-trading company Smarkets is opening a new office in Washington, DC The company, which offers wagering in Colorado on the SBK Sportsbook platform, is based inLondon. Smarkets is also licensed but not yet live in Indiana and Iowa.

“An East Coast office has been in the plans for some time and DC appealed to me greatly due to its vibrant tech environment and diverse talent pool,” Smarkets US General Manager Sheldon Hanai said. “It’s also an energetic sports city with all of the major American sports represented and, of course, you’re right in the political and economic center of the US.”

What does rapper Wiz Khalifa have to do with sports betting? He will be one of two headline performers, along with the Swedish DJ Alesso, at fan duel‘s fanfest on Sept. 10 at Guaranteed Rate Field in Chicago.

Also appearing at the event, which gets underground at 2 pm local time, will be Chicago Bears legends Brian Urlacher, Devin Hester, and Charles Tillman. According to a press release, they’ll be among several local sports luminaries who will compete against each other in various sports challenges, including ax throwing, Connect 4 basketball, a quarterback challenge, HORSE, and more.

“This event will have something for all and is just another way for us to do something extraordinary to celebrate our customers and sports betting in the state of Illinois,” said Andrew Sneyd, FanDuel’s senior vice president of brand.

The second-largest World Series of Poker Main Event ever played down to its final 10 players early Thursday morning, setting up a final table that begins Friday and will end Saturday — or perhaps in the wee hours Sunday — with one lucky and skillful player finishing $10 million richer.

With 8,653 players eliminated from the starting field of 8,663, there isn’t much in the way of star power remaining. For the 27th year in a row, it will be an all-male final table. Play was to begin Friday at 2 pm Las Vegas time with a pair of co-leaders tied with 83.2 million in chips — Norway’s Espen Jorstad and Washington, DC’s Matthew Su. The most recognizable name remaining was Asher Conniff, best known for capturing a World Poker Tour title at Borgata in Atlantic City in 2015. The final table streams live on PokerGO. 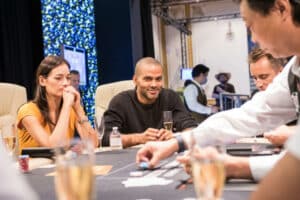 Parker used the occasion to give his competitors a taste of his new Champagne Jeeper. The former San Antonio Spurs point guard has been known to play in the Main Event and assured his guests that he intends to enter again in 2023.

More of the most important, interesting stories

ONLY A MATTER OF TIME: Casinos implement cashless gaming for competitive edge [CDC]

Was he taken in by the reprehensible, relentless promotion of sports betting on Canada’s sports networks? @Sportsnet @TSN_Sports https://t.co/77DQcK4OPS