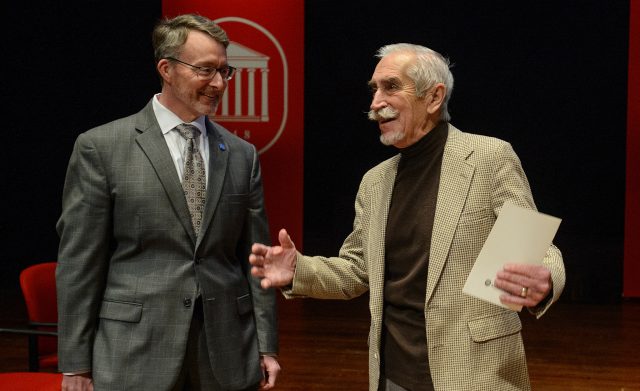 To say that Smith was a big deal would be an understatement. He leaves a legacy at the UM School of Pharmacy and the pharmacy world at-large that is unmatched.

“It is not uncommon when meeting alumni for them to ask about him or share a story of how he impacted their life,” said Donna Strum, UM pharmacy dean. “He was an amazing person whose legacy will live on.”

Smith made history in 1968 by becoming the first chair of the Department of Pharmacy Administration, a position he held for more than a decade. During this time, he became one of the most renowned figures in pharmacy administration, helping to define a relatively new field.

Noel Wilkin, UM provost and executive vice chancellor of academic affairs, praised the impact Smith had on both the university and industry.

“When a profession loses an icon like Dr. Smith, it causes all of us to reflect on how far we have come as a result of an individual’s contributions,” said Wilkin, who joined the university faculty as an assistant professor of pharmacy in 1996 and worked closely with Smith for several years. 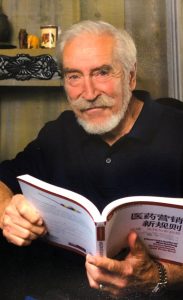 Mickey Smith is being remembered as a mentor, author and pioneer in the field of pharmacy administration. Submitted photo

“He was one of the most prolific authors in the discipline of pharmacy administration and is widely credited with being one of the pioneers in studying the social and behavioral aspects of pharmacy and health care.”

Mick Kolassa, a former associate professor of pharmacy administration at Ole Miss and himself a household name in the industry, echoed that sentiment.

Smith was well-known as an influential writer. His first book by him, “Principles of Pharmaceutical Marketing,” was the very first pharmaceutical marketing textbook when it was published in 1966. He also wrote the widely-used “Pharmacy, Drugs and Medical Care.” Five editions of the textbook were published, with the first in 1972.

Over the years, Smith wrote or edited 21 books. The most recent came just a couple years ago, with “Government, Big Pharma, and The People: A Century of Dis-Ease” (CRC Press, 2020)

Smith also was the founding editor of the Journal of Pharmaceutical Marketing and Management, a first-of-its-kind pharmaceutical marketing journal that was distributed worldwide for two decades. He has also published more than 400 articles in more than 180 publications.

“Dr. Smith not only shaped the profession, he had a tremendous influence on the marketing of pharmaceutical products in the 1980s and ’90s,” Wilkin said.

His interests extended beyond the pharmacy world. Smith was an avid fan of vintage radio programs and amassed a collection of 300 cassettes and numerous books.

He wrote two books on the subject. “Pharmacy and Medicine on the Air” (Scarecrow Press, 1989) examined how pharmacists were featured during the “Golden Age of Radio,” and “How Fibber McGee and Molly Won World War II” (BearManor Media, 2010) is a detailed look at how the classic comedy program kept the nation laughing during World War II. 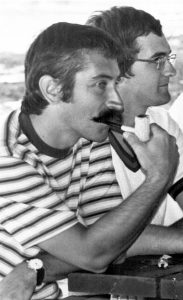 Mickey Smith participates in a retreat for the UM Department of Pharmacy Administration in 1977. Submitted photo

Smith was also a big baseball fan and a lifelong supporter of the St. Louis Cardinals. He was even named for major league catcher Mickey Cochrane.

Outside his well-deserved fame, Smith is most remembered by his students as a mentor who truly cared for the well-being of those he taught. Wilkin said the impact of his kindness can be felt across the industry.

“His celebrity status within the field and industry did not alter his interactions with students, faculty and staff,” Wilkin said. “He always willing to help and advise, his advice, guidance and mentorship helped me to start my research career, and he has positively affected the lives and practices of thousands of pharmacists and researchers.”

Strum recalled Smith’s talent for connecting with students and inspiring them to follow their interests.

“I vividly remember his ability to add humor in class and relate to each of us in pharmacy school, and I will forever be grateful for the internships and projects he encouraged me to pursue during graduate school,” Strum said.

John Bentley, professor of pharmacy administration, remembers Smith for taking an active interest in his young pharmacy career and for being a guiding force.

“By the time I actually met Dr. Smith when I was a pharmacy student, I had built him up in my mind to such mythical levels that I was actually very intimidated,” Bentley said. “But my initial meeting with him dismissed these prior beliefs and significantly changed my life.

“When I did finally meet him, I met a person who was more interested in me and my plans than anything else.”

Kolassa praised Smith for sharing his wisdom and for encouraging him to find his own path.

“I said of Mickey that I see what I see because I am standing on his shoulders,” Kolassa said. “He pointed the way for me in so many ways but he wanted to be sure that I wasn’t following him in his footsteps. It was clear that he wanted me to blaze my own trail.” 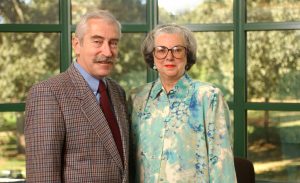 Mickey and Mary Smith established an endowment in 2019 that provides income for graduate student support, faculty development and seed funding for research projects in the UM School of Pharmacy. Submitted photo

Even in retirement, Smith remained actively involved with the department he helped found and was a frequent presence at the School of Pharmacy.

That dedication can be seen in the Mickey and Mary Smith Pharmacy Administration Endowment. Smith established the endowment to aid the department with graduate student support, faculty development, travel expenses and funding for new research projects.

Through his teaching, writing, mentorship and dedication to the profession, Smith will remain a powerful presence at the school for many years to come.

“Dr. Smith was my teacher, adviser, mentor, colleague, collaborator and friend,” Bentley said. I learned so much from him and will miss him so much.”